Let’s take a walk around the neighborhood.

There are a couple few little dome tents.
They are not here just for the night. 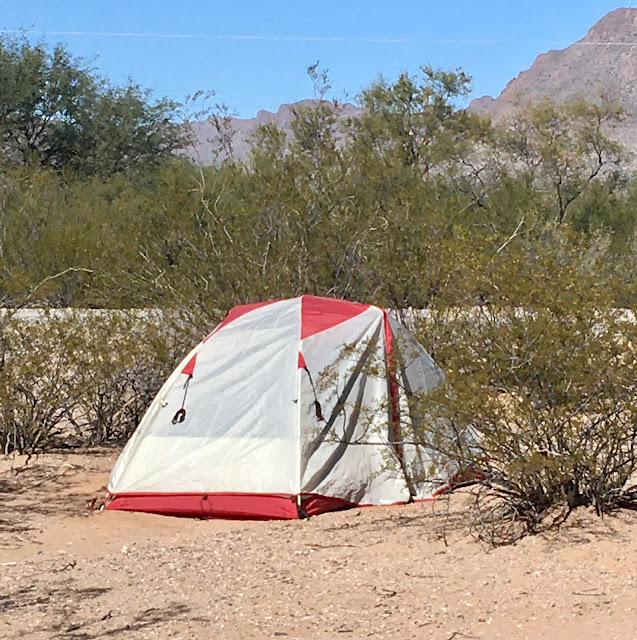 These two have been here as long as we have, a week now.
Let me tell you, the mornings are cold! 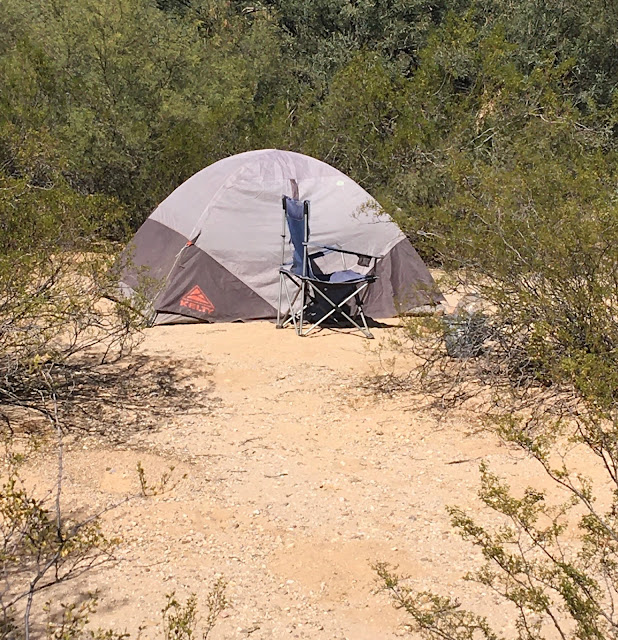 There are a couple full-size tents too. 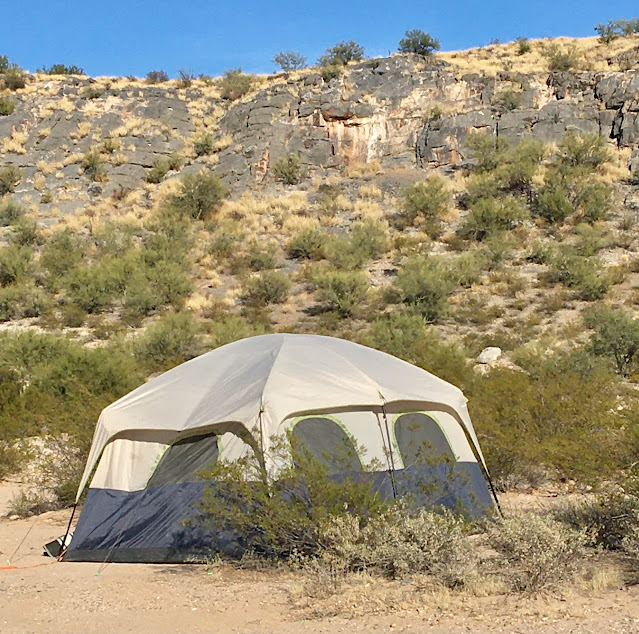 This guy was over there by the mine shaft.
That is a Toyota Prius with a specially designed tent or “habitent” on back 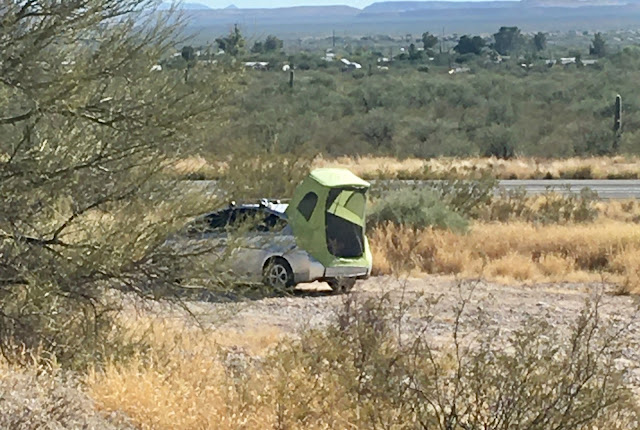 I don’t have any words. 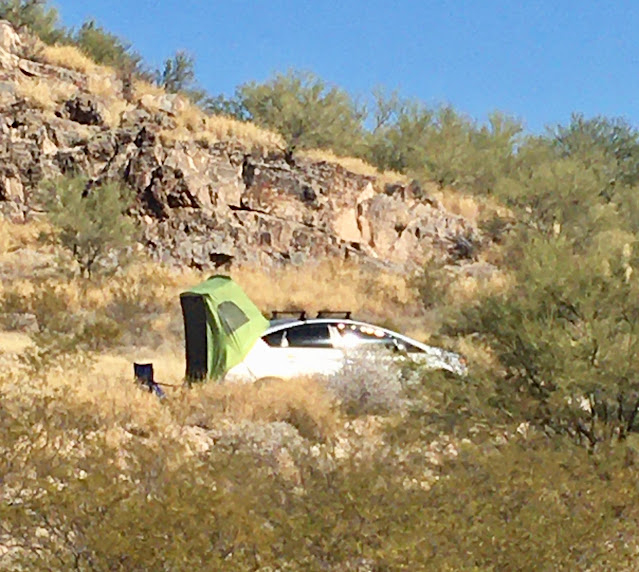 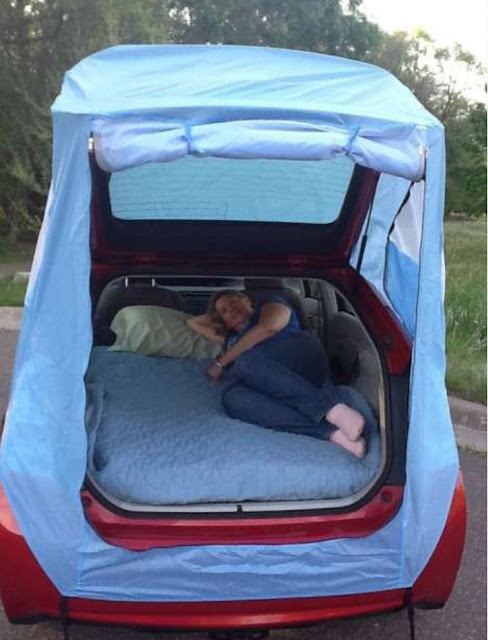 This guy was here for only a couple of days.
A do-it-yourself home project.
I just see something very heavy here, not to mention having all the aerodynamic features of a brick. 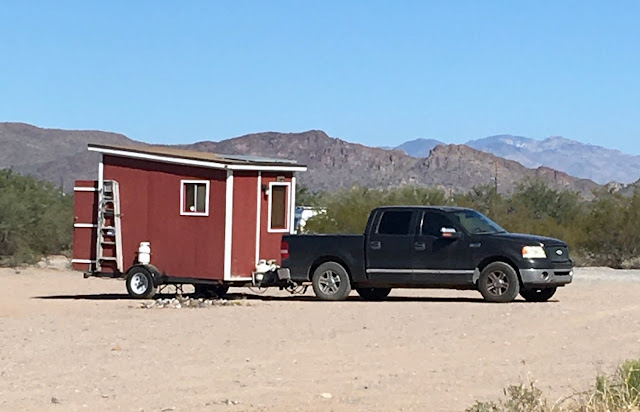 This guy arrived mid-week.  I eventually talked with him.
Steve is from upstate New York and lives on the road for six months each year,
escaping the brutal winter back home.  He said it took him about six months to build out the little school bus, where he has everything he needs inside including a shower. 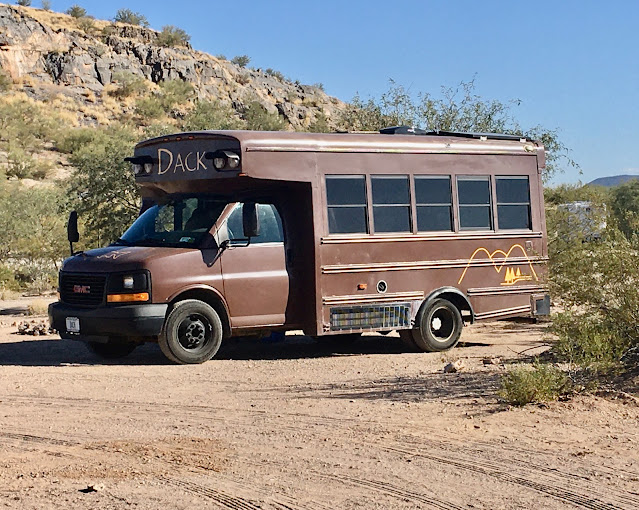 I asked him if he saw the ambulances.  He said he had.  “If I had to do it all over again I would have went with an ambulance.”  I asked why for each is built with the same heavy-duty ruggedness.
He said because all the wiring and cabinet cubby-hole storage is already in place.
Personally, I would go with his little school bus.  Why?
When I went back by the ambulance girls one day it set in with me, something I had overlooked.  There are no windows except for three small windows: two on the back doors and one on this side door.
I want to see outside and enjoy the view.
Incidentally, the Texas ambulance woman left after only a couple of days.
Miss Colorado is still here. 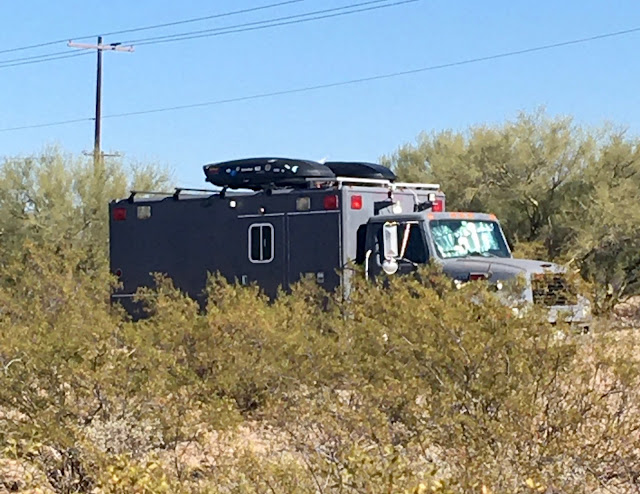 - comment reply -
“I have lived in California my entire life.  I can think of no state more beautiful.  What mismanagement are you talking about?  Restore what?  I live in Boulder Creek.  I would never call your state a tradegy.”
As I said about what I mention to people I meet, “The only thing California has going for it is the weather and the scenery.”  It is beautiful.  Darn near the entire Pacific coastline is outstanding.  I lived near the rugged Sonoma coast half of my life.  Grew up near the southern California beaches.  Take the High Sierra mountain range and all land east of there and it is as if you are in another state not California.  Add the upper portion of northern California to that.  Beauty and un-California like living abounds.
Highway 395 on the eastern Sierra is one of my favorite drives in the entire country.
I respect your love for California, Jeff.

Our neighbor in Seattle converted a bread truck to a camper. He did a great job. We bought it from him and I drove it all the time. Floor shift. I loved that little white sweetheart.

At some point, which I haven't decided at all, the motor homes/trailer campers are moving into tiny homes which travel. That's what I thought of when looking at the pickup guy's little square house on wheels. Tiny homes are all the rage in architecture and environmental circles, as well as offering civilized options to homeless folks. I love looking at them as much as how camping outfits are configured. It's all a great puzzle!

I thought the first thing as Barbara, that the guy had built a tiny home that he was going to pop down someplace. The tiny home thing not a long distance travel thing, but a house that jumps from one place to another, generally short little 'hops'. Of course, there are plenty of impractical people in this world, so hard telling what is happening there.