When we stayed the night at THE THING? tourist trap the white ambulance pulled in that afternoon.  She was from Texas.  A couple hours later I noticed she and this new arrival, the gray ambulance, were around back near us filling up five gallon water containers.  The gray ambulance towing the car was from Colorado. 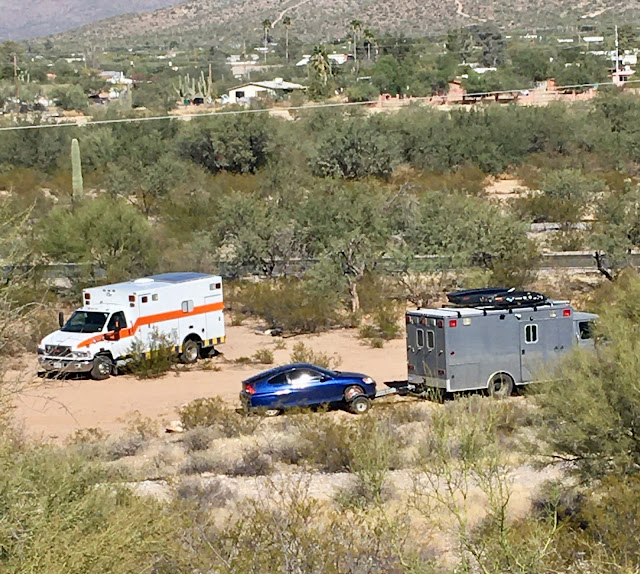 Before I go on, the Colorado woman was fixed up like this.
Her hair was more brightly colored and she wore a black long sleeve top with horizontal white lines.
I imagine she was an interesting woman. 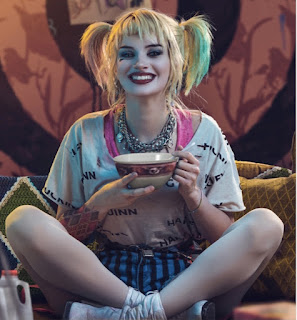 Ambulances make for good RV conversions.  They are built extra strong and durable considering the life they will lead.  They are roomy inside and you can stand up straight inside.  The storage opportunities available is immense considering there are outside compartments also.
I selected a few images to give you and idea what people have done to fixing them up to live in. 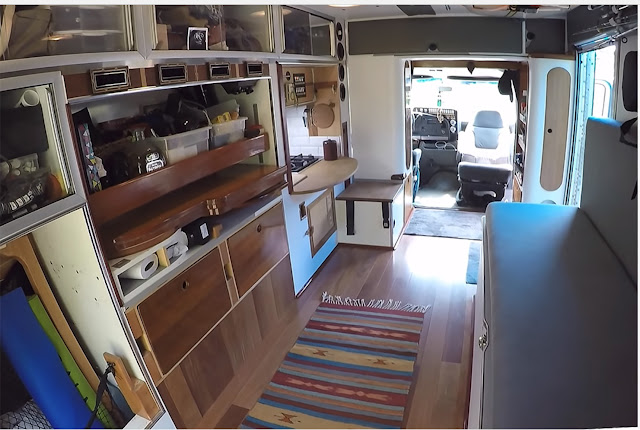 Most I have seen while camping are like the Texas woman’s where the original color scheme is still there.
Personally I would do like the Colorado woman did.  I wouldn’t want the attention.
In fact, when the Texas woman pulled into the THE THING? parking lot I was walking around out front to take a picture or two.  When she pulled in my thinking there was an issue going on inside the tourist shop.  Maybe someone’s brain had melted from that loud music inside the museum.  She waved at me, I saw the Texas plates and I then knew she was a nomad. 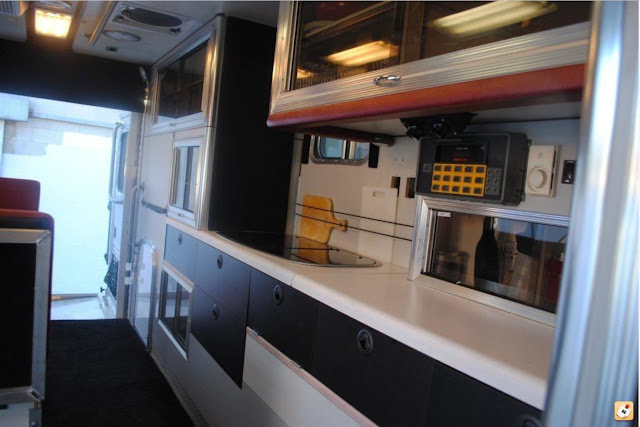 Personally though I would not have an ambulance.  Even if painted, it still looks like an ambulance and I don’t want people bothering me asking questions.  Fuel milage might be hampered too. 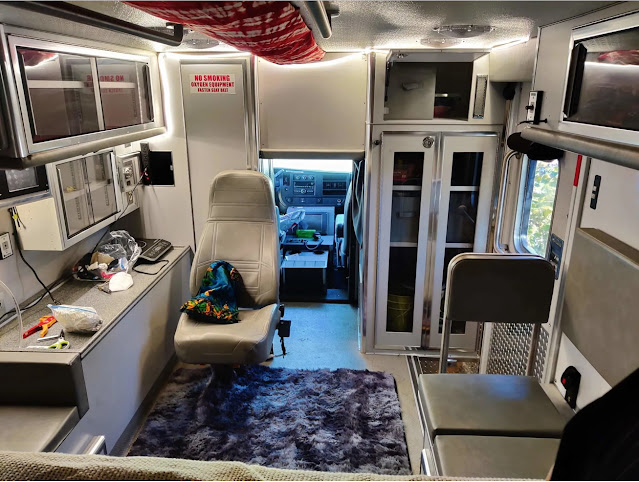 Also, knowing the trauma and bloodshed that occurred inside, no thanks.
I’d not be able to get that out from my mind.
It’d be the stuff of nightmares for me.
Heck...people died in there!! 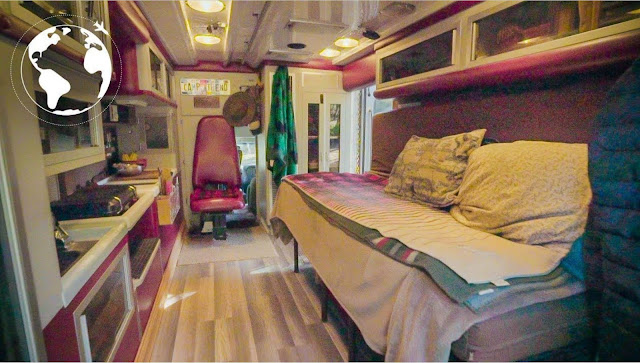 Have you ever been taken for a ride in an ambulance?
I can say I have.  Motorcycle vs car accident when a teen.  Nothing serious thank heaven.
- comment reply -
“I imagine you must have been born in that environment.”
Sadly no.  Born and raised in the greater Los Angeles area.  I cannot go back to take a drive down memory lane.  It is all a ghetto now.  We would be at risk for our lives to tour my old neighborhoods.
Posted by John @ Beans and I on the Loose at 11:00 PM

I can imagine that ambulances are a pretty good platform for a wanderer. They're built very strong, most likely had a rigorous maintenance schedule and as a former EMT I will tell you that the onboard vibe was all positive no matter what we dealt with. Mileage though...meh.

Good considerations. I sure would have some other ideas about how to change things...adding more padding here and there for comfort...last shot is getting there.

You made me laugh out loud, John. We live in an old house. People were born in it. People died in it. There is one story about the man who had the house built. He was dying upstairs, and his friends from a local civic organization came, surrounded the house and sang hymns.

It's the circle of the life.

Of course, ambulances house more traumatic deaths, sudden departures. Maybe that's different. I know people who bought a house that someone was murdered in. That would bug me, I guess.

Thinking about it, I agree. I would not want an ambulance either.

No place more beautiful than California. What a tragedy it's been so mismanaged so long. Hopefully some day there will be restoration. Same thing with the Seattle area. And Albuquerque.
But just think! With an ambulance you could put on the lights and siren and everyone would move over! I know. That little thing called illegal. And Beans would go nuts!

Babies would have been born in ambulances as well so that might mitigate the deaths. I would imagine they would not be pleasant to drive long distance, though.

I have lived in California my entire life. I can think of no state more beautiful. What mismanagement are you talking about? Restore what? I love where I live in Boulder Creek. I would never call your state a tragedy.
Jeff Fara

I have a few silly comments about cruising down the road in an Ambulance, but I don't want to wear out my welcome.

I lived in a house where a lady died, she saved my life, I believe in spirits.
One night I was awakened and my bedroom was full of smoke. My comforter had fallen on the baseboard heater...But the room was not full of smoke yet, maybe in a few minutes I would have been toast.
Believe it or not, I'm still here. There was another episode but sharing one is enough.
eh?