This poor guy deserved a post all to his own.

As I was walking around one day over near where the cave and mortar holes are this old motorhome had moved in.  As I neared it I could see the owner was cutting something on the driver’s side using a hacksaw.  The dirt road looped close to him.  It was only when I got around the side I could see what was going on.  It was all I could do to remain appearing not astonished.  He noticed me coming and waved so I stepped up closer.

Before I go on, these photos were taken later after I walked away a hundred yards and could covertly take them without doing so right there next to him.  Its just amazing what these phone cameras can do and this is with me having zoomed in all the way then later cropping the photo making the image larger.

As you can see, the overhead of the camper above the truck cab has given way.  It has collasped so much that it is now resting on the cab roof.  There should be a few inch gap between the cab roof and the underside of the overhang.  It is so bad that he was no longer able to open the driver’s side door.
He was cutting that metal trim piece with the hacksaw hoping for what, I don’t know. 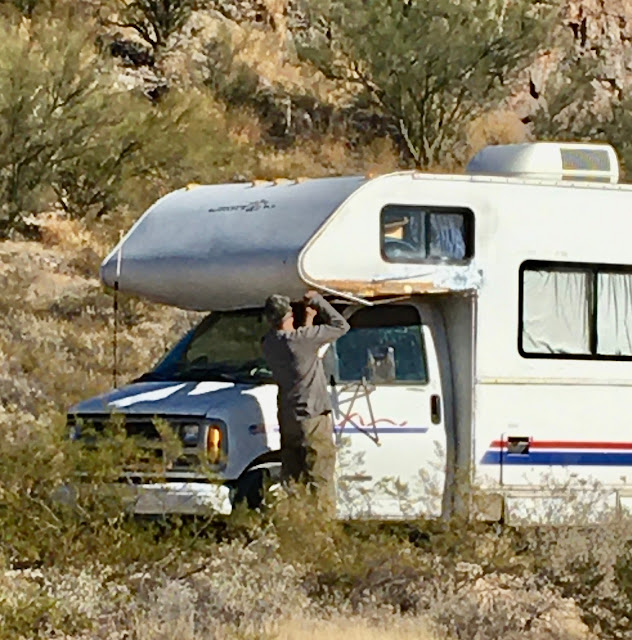 Here you can see the sag in the overhang.  That should be straight across. 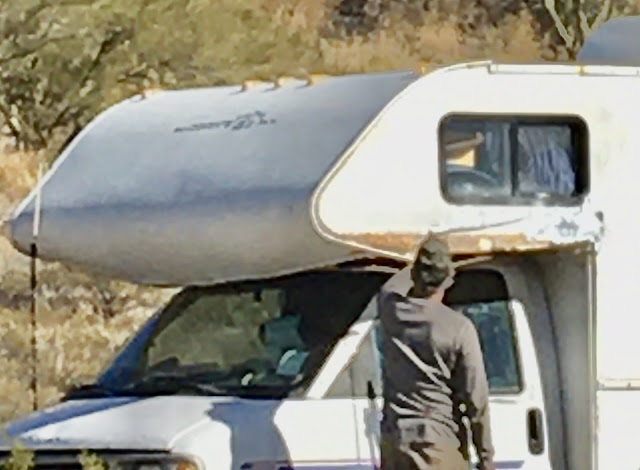 There obviously is a water leak from the roof that has gotten down in there and softened up the insulation and wood framework supporting materials.  I am pretty sure this guy is a hoarder and the inside must be stuffed full of crap.  Just look in the window.  The side windows looked similar.  The overhead must be crammed full and the weight of all the junk up there has accelerated the damage.
Final assessment: this is unrepairable.  The RV is junkyard worthy. 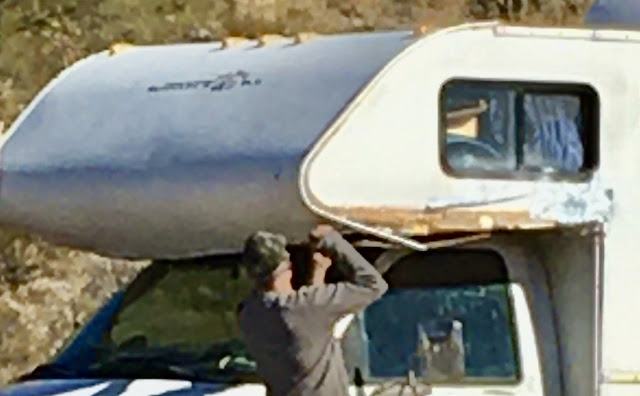 The guy was from Kansas.  He was a nice fellow seemingly unperturbed to his predicament.
Two days later I saw he had the driver’s side door open, so he solved that part of the problem.  Two days after I thought I should get a full view photo of the RV for you.  I went by again but he was gone.

It is always sad to see people who are simply unable to manage their lives.

Water leaks. They do sooooooo much destruction if we don't deal with them after we KNOW they are there. Reminds me of life. Note to self: Don't leave it too long.

He may have got it for free? I've seen the same issue many times on the road.
I saw one rig in a state park in Wenatchee, the next week I saw the same R.V. at the State Park on the Columbia river. Mary Hill. It was held together with duck-duct tape. He had a premium site. It must have run pretty swell, the drive is over 3 passes to get there.
Maybe beyond being "frugal?"
P.S. I am also frugal-cheap, not to that extent tho......