Gunsight Wash just to the north of us a few hundred yards is quite wide.
The entire area around here for ten miles is designated as a flash flood prone land.
At least the highway sign a few miles north of Why says so.
It was difficult walking being soft sand.
I found sticking to the sides along the bank had firmer ground. 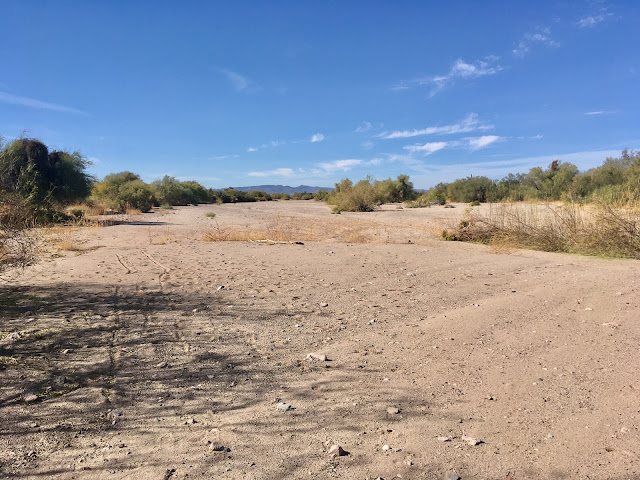 Right away I began seeing rocks that...geez, I don’t like calling her “crazy woman”.
I’ll call her Rose since this was at her camp. 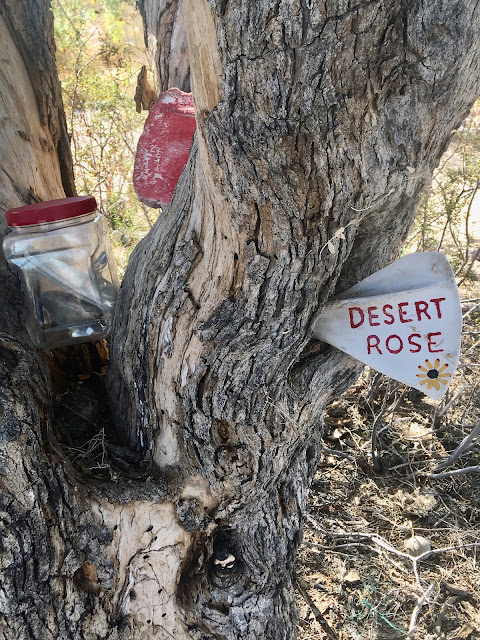 Where was I?
Oh yeah, 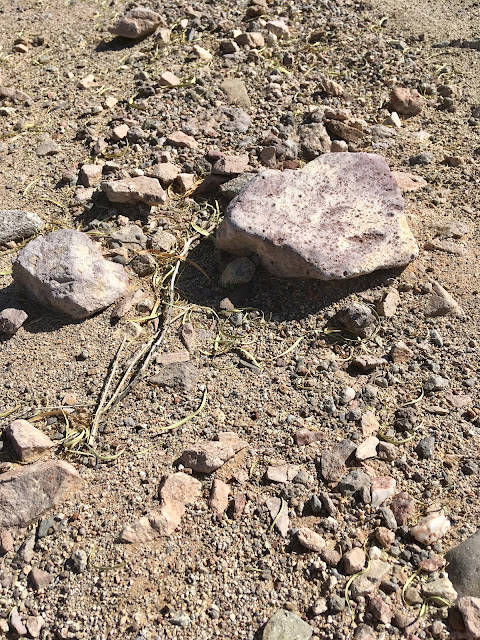 Rose had a good supply of rocks to work with thanks to flash floods bringing them down the wash. 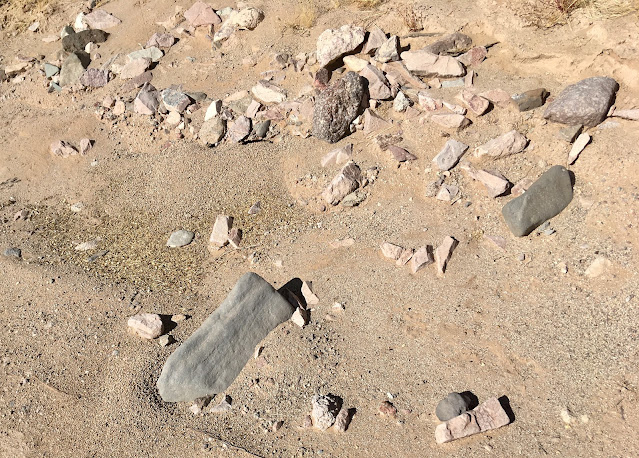 I was coming across occasional bits of quartz also so all of that in Rose’s camp
could have come from the wash also.
Looks like a piece that had been worked by Native Americans but I doubt it.
Too thick for a arrowhead. 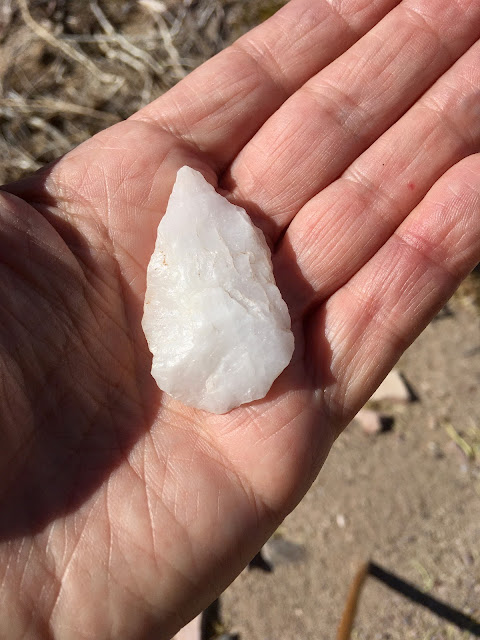 Then I came across this along the bank. 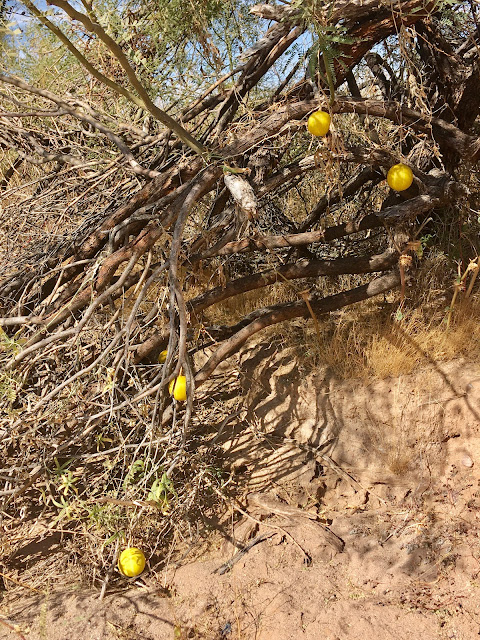 I have a couple apps on the phone that identifies plants and trees by just by scanning it with your camera.
What a wonderful age we live in. 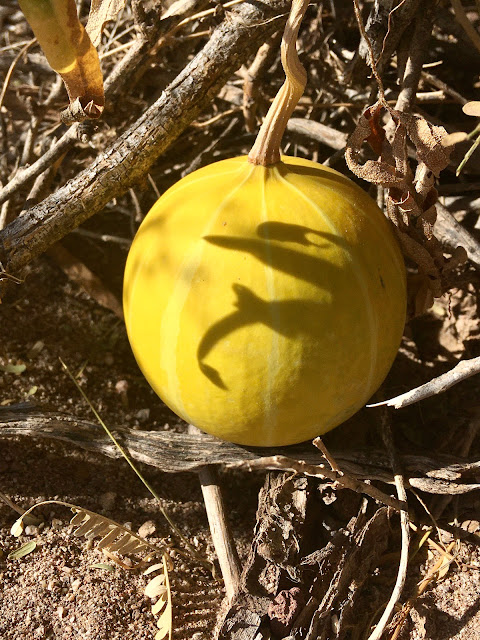 Coyote melon or Coyote Gourd
They were the size of a large orange or small grapefruit.
Fresh young ones that are green are edible.  At this stage they are not.  Very bitter.
Indians would let them dry out then the seeds inside rattled which they used in their dances. 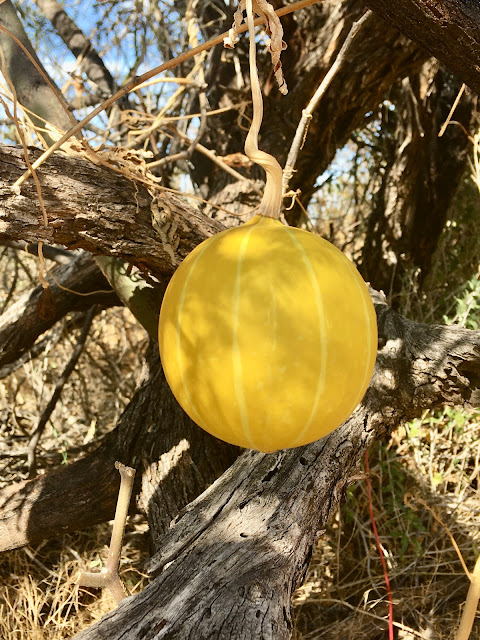 Continuing on I was seeing signs of how intense these flash floods can be by all the debris stacked up against trees growing in the wash.  Not a place to be when the summer monsoons hit. 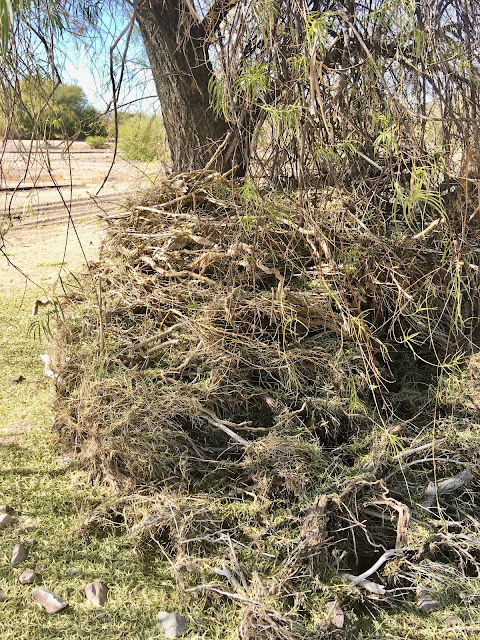 Then I came upon what the app identified as a Desert Thorn-apple.
I have doubts for the range of this plant didn’t seem to extend this far east.
Said it was very toxic, is used as a hallucinogenic drug which involves the inability to differentiate reality from fantasy.  I have met people like that.  Can be fatal.
Well I will not test that, doubts or no doubts. 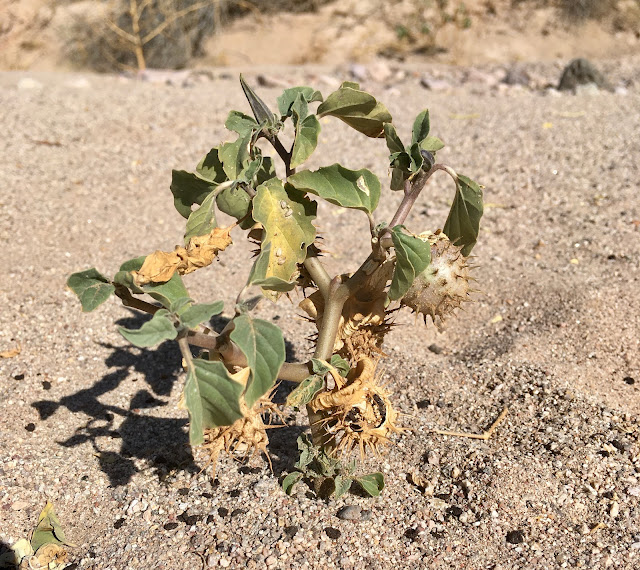 I turned back once I reached Rose’s camp.  I had been thinking of who tried to eat the coyote melon finding out it was okay to eat when green.  And then there was the poor soul who was the first native to try out a desert-thornapple.
- comment reply -
Yes, I figured where the horse died is where it was buried.  But it still had to be rolled over into the hole.  Could two people roll a dead horse over?  My goodness, just digging that hole would do me in.

I hope digging that horse grave was doable for the woman and her son, and it could have taken quite a while. Dig for a couple of hours, rest...repeat. Loved seeing the two fruits of the desert. Glad you could look up what they were.

You would slope the hole. I imagine it was not that deep and they would mound dirt on top. None of it would have been easy. Especially having to live without that horse's help. Not to mention it was probably a member of their family. We used to mound cow manure over our cattle that died. Circle of life. Farming and livestock raising means a pragmatic view of animal life. We were not encouraged to make pets of our animals. The barn cats were ferrel and would only come to the barn after milking when we fed them. We had to try to protect the female baby cats from the males who would eat them. Sorry. Don't mean to be gross.

PS: That wash looks like a perfect place to pan for gold.

PPS: I'm losing it. The tom cats would eat the male babies so no competition. Been a long time since I monitored cats in the farm yard. I hated those male cats!

That was such an interesting post- all the fascinating things you found in the wash. I really liked those pretty little yellow fruits- at first i thought they were christms baubles. I do enjoy reading about your travels.

I imagine the flash flooding would be most spectacular.
Did Beans enjoy the soft sand? A large litter tray?

Yes. Two people can drag a horse. Do not ask me how I know this.