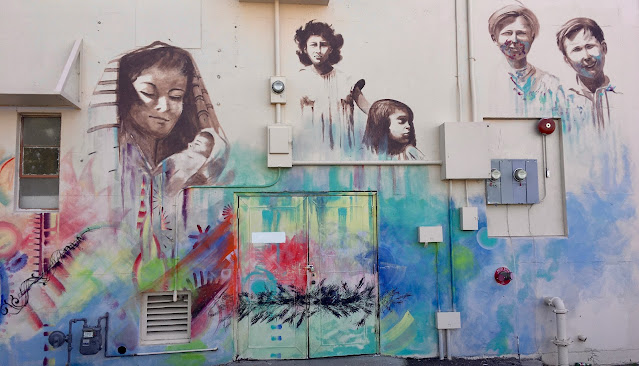 You wouldn’t think me using those words describing going into town would you?  We got an early start leaving at 8 a.m. instead of nine.  After filling three water jugs at the Shell station (which has diesel for a dollar less than the Chevron)  both Dollar stores had only one or two customers.  In and Out.  Pathetic Grocery had not that many more.  Plus Pathetic Grocery delivered this time.  I found something I had been long searching for (had it always been there and I overlooked it?) I was able to tick off everything on my shopping list plus getting another one of those delicious carne asada steaks and finding they had pollo asada too.  That’s chicken.  Maybe it is that I finally know where to find things and am not wandering around in a daze like a tourist as much.  Next was down the road to get a air and oil filter for the Little House on the Highway.  It is a small Napa Auto Parts store so naturally they had to order it.  “It’ll be in tomorrow.”  I told them I’ll be back in a week or so.  Finally a stop at the Little Free Library (nothing), walked down to the post office then back lingering around taking more mural pictures not feeling pressured to get back home.  I picked up a gallon of gas for the Honda at the Texaco station in Why then we arrived home at 11 a.m.  Again, a three hour tour but much nicer overall. 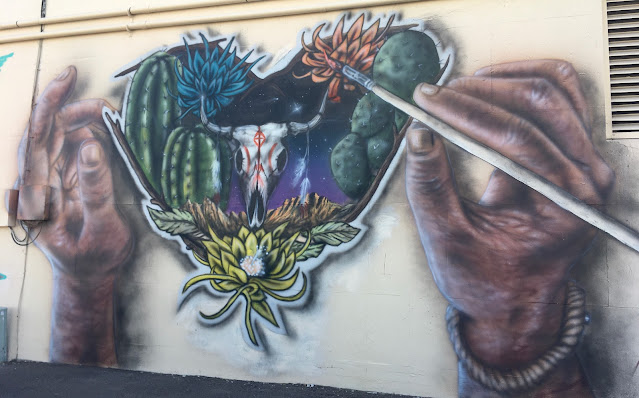 That’s fun. A mural depicting some well worn hands painting. Is there significance in the skull - apart from you being in cattle country.

Think of me as being an overseas visitor who knows nothing about the place we are travelling through. I might have to do a bit of research.

Good shopping trip, I'd say. Love the murals...any attempt at art on bare walls usually is ok by me. The last shot with the artist's hands is excellent. All the photgraphic pics of children seemed pretty sad to me.

Someone has some talent. Hands and faces are beautiful.
You remind me of a ballet dancer very carefully going through your dance with precision and care. You'll be whirling and twirling by the end of winter and cutting your time down to one swift measure. I'm going to have to look for seasoned steaks. I've never bought any.

Those murals are gorgeous. The next time you're in town, you should see if you can find anything out about the artist. I am intrigued by such a wonderful talent in such a remote part of the world, happily sharing his/her gift.