In response to my displeasure of shopping one commenter asked if I had thought of ordering online.  Well I actually did in my endless quest all summer for the tea I like to buy.  One day I thought about online.  Yes, I could buy it but I’d have to buy five boxes!  Just where was I going to store five boxes of tea?  And would box number five still be nice by the time I got around to it?  I started reviewing other teas online.  I am not a fan of froo-froo flavors for my tea.  I long it strong and black.  The last shopping trip I picked up this brand.  Twenty-four bags.  If I don’t care for it then not too much waste.

You can imagine my astonishment when I open the box.  These bags were twice as large as what I had been using.  But the real test was the taste.  Same-same as far as I could tell.  Wow, this is good.  I can get a stronger cup of tea with just one bag.   I’m switching. 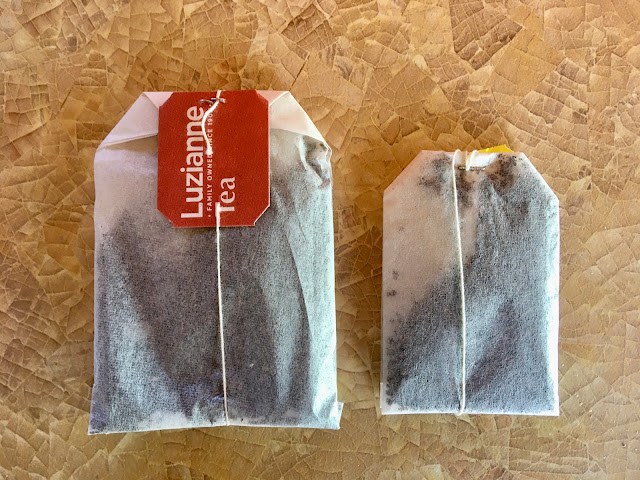 This has happened before with other food items in the past.  Sometimes I am forced into buying something other than what I usually buy only to find out I like it better than the old standby.
But that doesn’t answer the question.
Times when we stay at a Walmart we are parked near where the online shoppers pick up their order.  I watch.  Yeah, that’s what I ought to do then I don’t have to be around all those people.  Truth of the matter is I have a hard enough time as it is when shopping in Walmart trying to decide what I want to select.  How could I possibly deal with making choices online?  I don’t need that added frustration.  On that topic I see the pickers in Walmart essentially shopping for others.  What a horrible job.  I’d rather be outside retrieving shopping carts.
Another suggestion was buying the boxed milk with a long shelf life.  I used to do that.  Here at Why I started buying two one-half gallons at a time and that lasts long enough for when I have to go into town again for some other reason (fresh produce or drinking water).  I had one of those cartons of long-life milk in my pantry and dug it out to put in the frig just in case.  I never was forced to get into it since being here.  I noticed the ‘best by’ date was April of 2022.  So I must have had it for a couple of years already.  I tossed it out the last trip to town.
- comment reply -
You all surprised me with the number of you who are Lisbeth Salander fans.  I’m impressed.
I read some reviews for the Lagercrantz continuation of Lisbeth’s saga and some said they were not as good.  I passed them by when I picked up the Hornet’s Nest in that used book store this summer.
Now I wish I had bought them.
And yes, Stephen King’s 11/22/63 captivated me.  I saved it to read again another day.  The Stand I have read twice.  Saved it too.  I’ve read others by him (not Pet Cemetary) but none were keepers.

Good thoughts about shopping. I just realized I need to get up early in the morning to do grocery shopping, when there might still be my favorite kind of bread out. I think I have my tastes and yet sometimes, when the favorite isn't available I try another, and sometimes it's better, sometimes not. Books...no comment. Oops, too long a comment, sorry!

What a gift it is when we accidently find a BETTER in life! Then to find a BIGGER and BETTER, well, that's like Christmas!

You certainly have learned how to scrimp and save over all of your years of travel.