Well, its been cold or wet and I haven’t been out much.  Because of that I resort to tell a story about these books.  It all began back before I went on the road full time years ago. 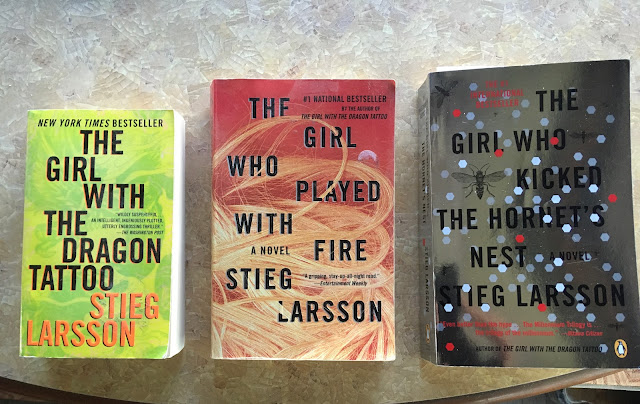 I had watched the movie The Girl with the Dragon Tattoo staring Rooney Mara in the title role playing Lisbeth Salander.  It takes place in Sweden.  I enjoyed it very much and eventually found the book which I read, liking it even more which is usually the case with book vs. movie.  Years later, now on the road, I came across the second book The Girl Who Played with Fire.  Lots of times sequel books are not as great as the first.  Not so with Stieg Larsson.  Again, an enjoyable read.  I wanted to watch the movie.  It was then I discovered the Swedish made movies were better than the American made ones.  They follow the storyline much closer.  Here Noomi Rapace plays Lisbeth.  I like her better, not to say Rooney Mara isn’t good.  So this past summer in one of the used bookshops I came across the third book written by Larsson just before he passed away, published after his death in 2004.
So why am I writing this?  Well the third book is thick, the largest at 563 pages of small print.  My first thought was cool, this will keep me entertained this winter in the desert for a long time.  I brought in the New Year by starting on the book on Monday.  Damn if I didn’t read over a quarter of the book that first afternoon!!  I couldn’t put it down until my eyes grew weary in the evening.  So much for my thought of it keeping me entertained for any length of time.  I’m looking forward to watching the movie afterwords.  The Swedish movies have subtitles.  I can deal with them.  The difficult part in the books is the Swedish names for people and places.  They are a bit confusing.
I am not promoting this series for you to read.  They may not be your cup of tea.  The whole point of this post is my thinking this last book would last me awhile.  I had finished it on Thursday.
So much for my grand winter plan.  Well it’s said that if everything always went according to plan life would be boring.
- comment replies -
Debby wrote:  “Since this whole Covid thing, I’ve discovered that I really do like being in my own space, doing my own thing.”  Debby, this is for you and me. 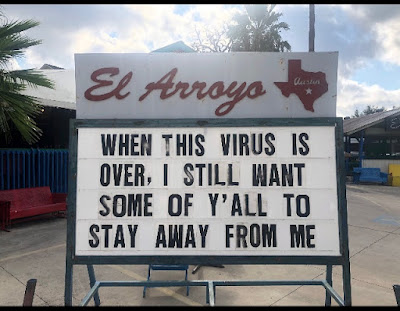 and
Yes, yesterday’s photo was of the Methodist Church across from the plaza in Ajo.  Iglesia is Spanish for church.  The name is Ajo Federated Church.  Looks more like a Catholic church to me.
and
Yes, I stocked up as much as I could and had room for before leaving the Tucson area back in mid-November.  The nearest place of any size with large stores would be Buckeye outside of Phoenix, 90 miles to the north.  We will just make-do until we leave here in a month or so.  I’ll try to refrain from grumbling about the “pathetic store” from here on out.
.

I loved that series and saw the first movie in the cinema with English subtitles. It was so good and so close to the book. I can understand why you demolished it so quickly. Another advantage of living alone.

These were most enjoyable books, and I only have seen the first movie with subtitles. Will consider seeing the others too. And enough time has passed that I might enjoy reading them again. Sometimes I remember the endings, but most times I don't!

I love a book that you can't put down! Now that I am retired, I can keep reading whenever I want!

Oh, I do love when you find a book that reaches right out and pulls you in. I used to read a lot of Stephen King, but when a child died in Pet Sematery, I said, "By god, the man has gone too far." I quit reading him. However, I got very intrigued by the thought of 'what if we could go back and change one event'. I saw the book at a thrift store, and picked up the book 11/22/63. I was caught up in the book from the very beginning. It was so long that by the time it was over, I was quite ready to for it to be done, but I could not put it down. It's been a long time since I've been so intrigued by a book.

Loved that series as well as the 3 Lisbeth Salander books written by David Lagercrantz as a continuation of Stieg Larsson's Millennium series.
Amazing how time flies by when you're deep into a good book. 😊
And that sign speaks for me as well.
Stay safe, warm & well, John dear. Loving pets & scratches for Beans!

If you pick up a few containers of Parmalot Milk you wouldn't have to go into town for milk. :) It's real milk - just shelf stable and only has to be refrigerated after you open it. Also, you can get the smaller individual sized milk (in whole, 2%, etc.) which are all shelf stable - they sell them for kids/adults lunches 6 or 8 to a pack! Even LESS trips into town!